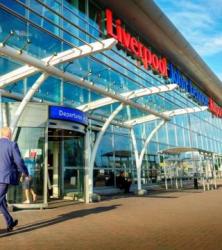 Honeywell Gent SI, HESIS, takes on the challenge to replace an obsolete fire system in a live and busy Liverpool John Lennon Airport
Liverpool John Lennon Airport, which sees over 400,000 passengers pass through every month, needed to replace the obsolete fire alarm system. They called in HESIS to take care of this project using Honeywell Gent system technology.

Liverpool John Lennon Airport (LJLA) is one of the UK’s longest established operational Airports. It opened on 1st July 1933. More recently, LJLA’s passenger volume rose ten-fold since the 1990s, taking the airport to the 12th busiest in the UK. LJLA currently handles over 5.1 million passengers per year.

The Airport is owned by a partnership of The Peel Group, a leading infrastructure, transport and real estate investment company in the UK, who first became involved with the airport in 1997, Ancala Partners LLP, the independent infrastructure Investment Manager and Liverpool City Council. Peel and Ancala each own a 45% interest in the Airport and Liverpool City Council 10%. Recent investments has focused on the airport passenger experience with queue times for airport security amongst the lowest in the industry for an airport of this size. LJLA is recognised for its relaxed,
hassle-free environment and best in class operational performance.

It was necessary to replace the obsolete fire alarm system to respond to emergencies more quickly and efficiently. This required LJLA to undertake a significant technological investment in a critical life safety system. With over 400,000 people passing through the airport per month, the fire alarm system is crucial, not only to rapidly identify the source of a fire, but to distinguish a false alarm from a real event. In the event of a real fire, the engineering team need to have control over the crisis with maximum visibility of the incident.

Whilst there was no question the Honeywell Gent system was the technology of choice for HESIS. The challenge was to upgrade over three phases, during the daytime and evenings whilst the airport was fully operational. This created a unique situation, as the building needed to have a fully functioning fire alarm at all times.

The robust Honeywell Gent system was selected as it provided full compliance with the fire system standard EN54 Part 23 and BS5839 Part 1:2017. This means the product is capable of meeting the required Lux levels in all areas, providing visual indication of a fire alarm activation for the hard of hearing. The majority of the design work was completed in a live environment, using the VAD design tools provide by Honeywell Gent. This allowed HESIS to plot the dimensions of all areas, and use an app to test Lux levels for compliant design.

The system comprised of three fully networked new Honeywell Gent Vigilon fire alarm panels, thus allowing full functionality, visibility and control from several different locations. This is ideal for the engineering team and the fire service when dealing with an incident. As part of the project there was also a requirement to interface with other systems on-site, including the PA/VA voice alarm system, and access control, along with all of the commercial units around LJLA. The largest challenge was the full integration, and mapping of the Cortech platform, which was again carried out by the HESIS engineering team.

The upgrade took place in the live airport environment, whilst keeping the original system operational, ensuring the safety of the passengers was a priority at all times. The new network, installed specifically for the three main panels, is running successfully, providing full coverage from different locations. Fully designed, installed and commissioned by HESIS, with no disruption to passengers, LJLA has now been upgraded to EN54-Part 23 and BS5839 Part 1:2017 compliance. HESIS delivered a robust, intelligent system to address the issue of adequate fire protection in the distinctive high volume facility that is Liverpool John Lennon Airport.