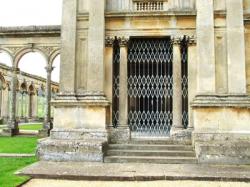 Witley Court is a ruined Italianate mansion built in the seventeenth century and expanded in the early nineteenth century by the Architect John Nash.

In 1937 a major accidental fire broke out which gutted one wing of the house and since the insurance company declined to cover the damage, the then owner sold the property which was subsequently broken up and sold in lots.

The ruins today are still spectacular and are in the care of English Heritage who restored the formal gardens and fountains.
The building is Grade I listed and therefore any work carried out must be carried out in a sensitive manner and Bolton Gate were consulted to replace gates which provided night-time security to some of the entrances, but which had ceased to function to due to age.

Collapsible gates were designed and manufactured with special folding bottom tracks to leave the floor surface intact and installed taking great care to pick up on the existing holes in the stonework as new fixing positions were not permissible due to the building’s status. When the gates are retracted during opening hours of the grounds, they are unobtrusive, being hidden by the existing stone columns and thus leaving the entrances completely clear.