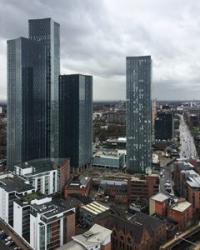 Designed by Simpson Haugh architects and located on the site of a former public car park, adjacent to the River Medlock on Owen Street, the development provides more than 1500 homes across four towers, with the 67 storey ‘Tower A’ being the tallest at 200 metres high.

As the remaining towers are 53, 47 and 40 storeys, respectively, it was essential during the design process that the system was capable of being adapted to suit the differing smoke extraction requirements of each structure, while ensuring they complied with all appropriate regulations and met performance specifications. An essential part of this process was the CFD modelling of the building and smoke control system, which was undertaken by SE Controls.

Using industry standard CFD software to simulate the conditions within the building during different fire scenarios, the smoke control system’s performance was verified to Building Regulations ADB for fire engineered systems, as well as the Smoke Control Association’s guidance document on the design of apartment building escape routes.

In each tower, the smoke control system uses a roof mounted duty and stand-by fan set which is actuated by a signal from the building’s smoke and fire alarm system and extracts smoke from the 0.8m2 smoke shaft. When triggered, the system simultaneously opens the smoke damper grille on the fire floor, as well as opening the 1.50m2 AOV, at the head of the main stairwell, and the stair door leading to the fire floor lobby, to provide ‘make up’ air.

Due to the height of the towers, each smoke shaft also incorporates either one or two axial flow ‘shunt fans’ to ensure the smoke extraction volumes and speeds are maintained throughout the shaft from the lowest floor levels, even on the highest tower.

The shunt fans also incorporate a unique feature, which was developed specifically for the project by SE Controls. By mounting the fans on a fully supported modular cassette, it allows the entire fan assembly to slide out of the smoke shaft into the lobby area, enabling routine inspection and maintenance to be carried out in a fraction of the time as engineers have unrestricted access.

In addition to the main extraction fans, dampers and AOVs, the system also incorporates a range of control equipment to ensure the system operates reliably every time while also allowing safe access to the building for fire-fighting teams.

Every floor in each tower incorporates a range of equipment, including smoke damper grilles, fan auto/boost key-switches and tamper proof MCPs, as well as OSLOOP alarm monitoring and MCP modules.

Dave Furneau, Senior Contracts Manager with SE Controls, who developed the shunt fan cassette system with his team, explained: “Although each tower has a different number of floors, the smoke control system design, principles of operation and installation is consistent across each building so that they protect corridors and stairs, enabling smoke free escape routes to be maintained for residents in the event of a fire.”

He added: “Every aspect of the system’s design, performance, installation and commissioning was evaluated to an exceptionally high degree to ensure our system met all the required specifications, which included the longer-term maintenance costs with the innovation of the fan cassette system.”