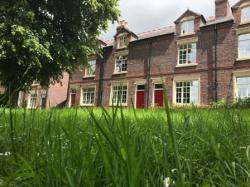 Saint-Gobain PAM UK’s Classical Plus range of traditional cast iron gutters and downpipes has been installed as part of a £10m Heritage Lottery Funded (HLF) refurbishment project to carry out essential repairs and restore original architectural features at the 194 dwellings that make up the Model Village.

The three-year project which has now drawn to a close offered a number of training and work experience schemes for local people and also included an exciting programme of activities designed to engage the community, creating a better understanding of the local heritage, and evoking a sense of pride in the local area.

“Cast iron was the obvious choice to restore the listed buildings to their former glory as nothing on the market can truly authenticate real cast iron. Many other materials try to emulate the cast-iron appearance with textures but never quite succeed. Add the natural longevity of cast iron which can reach as much as 100 years, at least twice that of aluminium, and 4 times that of plastic, the traditional value of yesteryear is still very much available today.”
THE PRODUCT

The Notts OG cast iron gutter system was installed throughout on the houses, which is a particular profile traditionally used in the area. This more unique decorative style Ogee gutter in 115mm size also provides a higher flow rate compared to the more common Victorian Ogee profile. The associated downpipe system supplied was the standard circular profile in 65mm diameter.

To save on installation costs, the cast-iron rainwater systems were supplied pre-painted in the black semi-gloss Classical Plus finish for immediate installation. The Classical Plus coating is a PPA571 (Polymer Powder Alloy) which has excellent hard-wearing performance properties and has been tested to over 1500 hours salt spray.

Martin-Brooks Roofing installed the Classical Plus rainwater and gutter systems over the 3-year project supplied through local Builders Merchants Willbonds based in Nottingham.

New Bolsover Model Village was built by the Bolsover Colliery Company in 1891 to accommodate its workforce and its lasting legacy to the coal mining industry which dominated life in the town from 1891 to 1993. It was the first of a series of model villages developed by the company, and the design was influenced by the emerging Arts and Crafts and Socialist Movements and their related Garden City ideas. At New Bolsover, this influence translated into building houses on three sides of a large square with the school which served as a village hall on the fourth side.

The buildings were listed Grade II in 1989 and 2004. The Model Village is also situated within the Bolsover Conservation Area which was first designated on 17 July 1971.