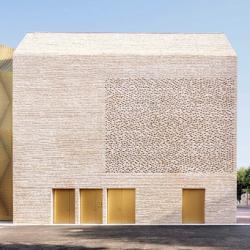 Knauf is delighted to announce its sponsorship of the Civic Buildings category of the 2021 Dezeen Awards.

Knauf has a long-established partnership with architecture publisher Dezeen. This has seen a series of collaborative events based out of the Knauf showroom in Clerkenwell and streamed live to audiences across the world.

Sponsorship of the awards adds a new element to this partnership and Jimmy Collins, National Specification Director atf Knauf, explains the rationale: “Dezeen is such an influential international brand, with an audience numbered in millions across its website and social media platforms. It’s a great match for Knauf which is helping architects across the world realise their design intent.”

Now in its fourth year, the Dezeen Awards programme had attracted over four and a half thousand entries before the deadline in July. The 93-strong panel of judges represent the international flavour of the event, being drawn from architecture and design practices from China to the Netherlands.

Once the judges have selected a “long list” – the results of this process will be published on the Dezeen website throughout August – there is then a second process, allowing for a public vote to select its own winners. The final results will be announced in a series of online shows in November.

The sponsorship allies the Knauf brand with the cutting-edge contemporary design that epitomises its “Build for the World We Live In” philosophy. The Civic Buildings category was an obvious choice for the sponsorship, given the number of large-scale public buildings that have relied on the products and technical support provided by the Company.

Last year’s winner of the category, the Noor E Mobin Primary School in Iran, is described as an “educational neighbourhood” with architects FEA Studio summarising the design as providing an “alternative perspective toward an educational space in which the opposing voids and valid spaces come together to bring about a sense of place, independence and uniqueness”.


Aisling Cowley, Head of the Dezeen Awards, is enthusiastic about the sponsorship arrangement: “Our aim is to partner with international brands which make a positive contribution to contemporary architecture and design, and we are delighted to welcome Knauf to our dynamic awards programme.”