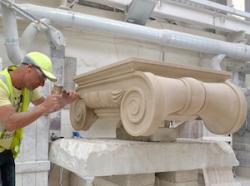 Portland Stone Firms, a supplier of the iconic British Portland Limestone located in Dorset on the world-famous Jurassic coastline, has established a new mine in its Coombefield Quarry.

With the mine having commenced initial operations in late 2020, a further 12 years of supply is available for the stone industry with over 450m3 of block stocks readily available.

Adorning some of the world’s best examples of masonry, the material is long synonymous with Architects and specifiers for prestigious projects such as Paternoster Square (adjacent to St Paul’s Cathedral in London) and is much sought after both domestically and abroad.

Coombefield Mine complements and strengthens the company’s existing operations in Perryfield Mine and further open cast quarrying in Broadcroft Quarry. Examples of which can be found on award-winning projects such as 60 Holborn Viaduct (London).

Coombefield Mine InternalThe addition of Coombefield Mine adds a further option to our stone range that provides the industry’s restoration teams with greater certainty when matching existing works and allows commercial/private projects to benefit from a wider aesthetic choice for finished masonry (a service also provided by Portland Stone Firms).