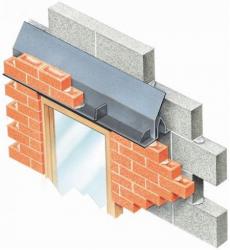 Are You DPC Compliant?

Construction is an amalgam of disciplines, in which varying Standards, build details and best practice approaches all come together in a determined sequence.

The result is usually successful, albeit not always logical.

The use of DPC over cavity wall openings is a good example.

Every opening in a cavity wall has a masonry opening dimension.

All measured and all scheduled.

In the midst of this, the scheduling disappears.

The important task of keeping the structure dry relies on a site operation in which DPC is unrolled, cut on site, then built into the inner skin followed by the outer skin in a manner that should harmonise with the lintel type and shape - and should in theory protect the arrangement from damp ingress.

But it regularly fails to properly do so and here are ten reasons why;

The Polythene roll DPC used is manufactured to BS 6515, and whilst this is the permitted Standard for some applications, it is not permitted to be used to form DPC cavity trays over openings!

British Standards state it should not be used.

The manufacturers of polythene DPC to BS 6515 say the same.

It is not suitable for such purposes. Furthermore, as it can offer little slip resistance, it can compromise the structural arrangement.

DPC is cut too short and does not extend sufficiently past the lintel ends.

DPC is irregular and/or does not take up the correct profile.

DPC does not project to form a defined drip lip (NHBC 6.1 D6. B) across head of frame.

Stopends are omitted and/or the DPC is not turned up to create a stop end.

First available horizontal course of inside skin is not at the ideal height to support the DPC so a lower position results in profile not conforming with Building Regulations.

The DPC is cut to over-sail the lintel end by the permitted minimum of 25mm, but with lintel bearings of 100 or 150mm it means 25mm over-sail is insufficient. Thus in 50% of all brickwork situations (225mm stretcher) the DPC will not extend far enough for a stopend to be incorporated on the DPC within a naturally occurring perp joint.

Where used with an external skin concrete lintel (therefore no lintel toe as with metal lintels) the emerging DPC shows on the underside of the lintel and requires some further cutting and/or modifying to eliminate it hanging/sagging across the opening and affecting aesthetics.

Cavitrays listed alongside the lintel and window schedule provide the remedy.

Cavitrays are pre-cut to length and incorporate all the correct over-sails, head drips and stopend provisions, plus they self-support so eliminate the need to search for a support course within the inner skin.

Integration is easy and swift especially with scheduled cavitrays conveniently ‘packaged ‘per dwelling’.

Scheduling the protective element of one of the most common construction undertakings makes sense, as does the use of the right DPC to achieve a compliant arrangement.

The British Standards state roll DPC to BS6515 should not be used and Building Regulation states material must be adequate for the purpose it is used.

Why ignore the requirement?

Think of safety glass compared with ordinary glass, - the two might look similar until performance and compliancy is questioned?

Legal and cost responsibilities where problems arise from the use of incorrect DPC and/or incorrectly formed protection must potentially rest with both specifier and user? Cavitray showing extended over-sail past lintel end.