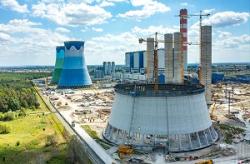 There are various types of post-installed mechanical anchors but undercut anchors are by far the strongest and able to resist much higher loads compared to mechanical expansion anchors. This is why they are often used in structures such as the nuclear power plants, where human safety is of utmost importance and failure often has catastrophic consequences.

An undercut anchor works differently. It works by creating a positive key in to a pre-cut or self-cut void inside the concrete. They either open out in to a pre-cut void as in the case of the LIEBIG Ultraplus, or they create their own void and key in to that, as in the case of the LIEBIG Ultraplus BLS anchor. They do not rely on expansion and friction and thus they do not create such high compressive or stress zones in the concrete. As a result, undercut anchors are able to make much better use of the concretes capacity and thus are able to resist much higher tensile loads.

In addition to normal tensile action loads, the positive mechanical interlock and the reduction of compressive stress zones in the concrete make undercut anchors more able to manage the action loads which are created in dynamic, seismic, shock and other such high impact application conditions.

Uses of Undercut Anchors
Undercut anchors perform very well in cracked and non-cracked concrete. They are able to do this due to the positive keying action which is created when they are installed. Positive keying enhances their ability to maintain their resistance as a crack in the concrete expands or is created. Unlike mechanical expansion anchors which require significant follow up expansion capability.

This explains the popularity for the use of undercut anchors on structures located in earthquake prone areas or where seismic qualification is a consideration.

Further application benefits of undercut anchors
It was discussed previously that the way undercut anchors transfer the tensile action in to the concrete and enhance the concretes capacity to resist the tensile actions, offers significant increased load capabilities. This principal of operation also brings additional benefits. Lower compressive / stress forces in the concrete, means that undercut anchors in general can be used closer to the edges of concrete and can be installed closer to other similar types of anchors. This allows for smaller baseplates, reduces materials and thus resultant cost savings in overall installation costs for an application.

Installation
Installation differs depending upon the type of undercut anchor being used.

For a self-undercut anchor like the LIEBIG SUPERPLUS BLS, there is no need for special tools. The undercut is created by the anchor itself. When the BLS Anchor is expanded in to a pre-drilled hole, keys at the bottom of the expansion shield create voids at a predetermined depth inside the concrete. Those keys then lock in to those voids and provide the resistance to tensile action.

In the case of the LIEBIG Ultraplus, a special tool is used to create a void at a predetermined depth inside the concrete. The spring action of the Ultraplus anchor when installed, forces keys to expand into the pre-cut void. This is how the resistance to tensile action is created using this type of anchor.

For more information on Liebig Anchors or to discuss your own specific requirements contact our technical team on tel:01977 687040 or email us at: liebig@ejot.co.uk and we will be happy to help.