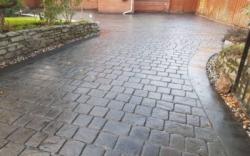 This article was first published in the September edition of Concrete Society magazine.

The scope and scale of projects entered into the 2019 Awards demonstrates the increase in the volume of concrete being used within the decorative concrete sector since the first competition 13 years ago. We have seen a core of 13 offering examples of their decorative concrete work over many years, but first-time entrants continue to grow, including one of this year’s winners, Swan Builders & Driveways of Stranraer.

One of the most striking features of this year’s photographic competition was the ever-improving quality of the images provided. This is partly due to the nature of the categories now being judged. Commercial projects are typically complete and fully furnished, showing the decorative concrete in its working environment. Contrast this with domestic driveway and patio photographs, where the landscape often needs to be completed by the client after the concrete work has been installed. Despite this reality for decorative concrete installers, many do return to projects later to photograph their work with the landscaping softening the harsh nature of the ‘just constructed’ product. Taking greater effort and time to compose photographs often makes them stand out among the many entries, making the judges’ choices easier.

The 2019 judging panel consisted of two representatives from current installation teams, both Golden Trowel winners from 2018, namely Martin Dolníček from Condecor in the Czech Republic and Sean Martin from Somcrete in Leicester, who were ably assisted by Ray Vidal of Allcrete/PICS Ireland, alongside PICS technical manager, ‘Dr Concrete’, John Linley. The Concrete Society was represented by its technical manager Richard Day and long-standing member Graham True.

For the first time the judging panel included a professional photographer, in the shape of Sean Finch, who was observing from a non-technical perspective and comments, “The overall competition was great with some incredible artistic design work and some really top-quality finishes. The pictures submitted were a real mix and there were some really well-taken photos with some good compositions and light.” James May from PICS was available to offer more detail and information on the industrial flooring and polished concrete applications featured.

We always welcome additional judges from the ready-mixed concrete and decorative concrete sector, so if you are interested in attending as a judge for next year’s competition, do let us know.

Graham True says,“Some believe in ‘truth to materials’ and wish concrete to be left as cast, unpainted and celebrated in its unadulterated as-cast state. While this is the ideal for some, we are dealing here with decorative concrete, which allows colour and texture to be applied and imposed. However, there is another widely held virtue that ‘simplest is best’, which does seem more than appropriate in this decorative concrete context. When the votes for this year’s entries were counted, so many for the same entries confirmed a general acceptance of what is considered good design and workmanship.” Throughout the years of the Golden Trowel Awards, judging the images provided by the decorative concrete industry has become more challenging as the overall standard of the images and projects has increased. The stand-out images of previous years are now the norm, as better cameras and the growing need for images on social media platforms improve the awareness of the attributes of a ‘good photo’. Judging has become that much harder.

John Linley remarks,“What a varied selection of internal and external domestic and commercial projects! Driveway and patio areas, an upmarket restaurant, a public seafront terrace, a fast food drive-thru lane, a zoo, a theme park, an office foyer, a kitchen and a very sophisticated skate park – all using varying techniques such as power- trowelled, polished and pattern-imprinted concrete, with a some great examples of vertical decorative render too. What can be done with decorative concrete and renders and where those products can be used has certainly been showcased this year. Well done to the winners and the entries that didn’t get a mention, despite the high quality of much of the work entered.”

Sean Martin, who was judging for the first time, said, “For me it was a real eye-opener with regard to the amount of imagination and skill displayed from the installers and contractors, not only from a UK domestic perspective but also I have to say that some of the commercial and international work that was viewed was very impressive. It just goes to show how attractive and versatile concrete can be. For us at Somcrete, it’s given us much food for thought. Some of the entries have really broadened my imagination and I’m sure will also excite others too.”

Our thanks to The Concrete Society for its continued support for the Golden Trowel, including hosting the judging meeting and to Richard Day who comments, “We are pleased to facilitate this competition and publish the results in Concrete. The winners, and indeed all the entrants, should be proud of their work and artistry as reflected in the photographs submitted.”

To enter the 2020 Golden Trowel Awards or for more information/technical advice about any aspect of decorative concrete design, installation or materials, e-mail: golden.trowel@picsuk.com. When submitting entries, please include name and company name.