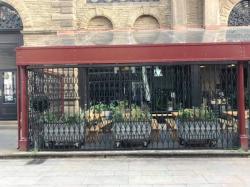 This Grade II listed building in Manchester’s vibrant Northern Quarter was first opened in 1858 by the then Mayor of Manchester as part of the Smithfield fresh produce market and was believed to be the largest market site in Britain.

The decline in market trading over the years saw the building close in the 1970’s and it remained empty and neglected for years until MUSE Developments restored it to it’s former glory in conjunction with Market Operations who had recently carried out a similar restoration to Altrincham Market.

In addition to the large seating area in the main restaurant hall, a rear external annex was created with a glass roof in keeping with the building’s semi-industrial heritage. Bolton Gate Company were commissioned to design, manufacture and install collapsible gates to seal off this area when outside trading hours.

The gates were designed with special removable bottom tracks to accommodate the sloping floor level and were powder coated grey brown to blend in with the surrounding structure.